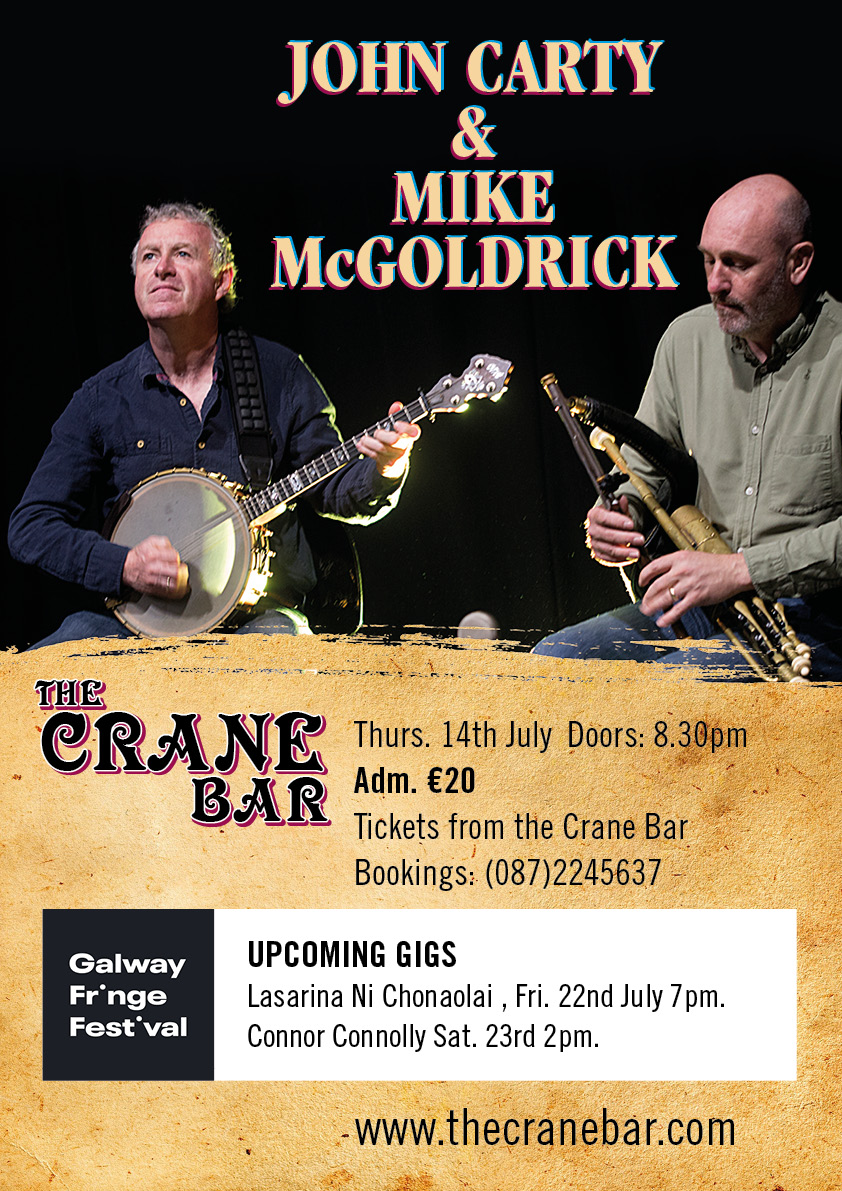 Master musicians John Carty & Mike McGoldrick come together for this highly anticipated performance. John Carty is a leading exponent of the North Connacht style and has impressive knowledge of the music of Sligo emigrant musicians. Carty was awarded the TG4 Gradam Ceoil Traditional Music of the Year award in 2003. He has released several solo albums on fiddle and banjo including I Will If I Can, Last Night’s Fun and At It Again. He has also recorded a number of duet albums including Pathway to the Well and Out of the Ashes with flute-player Matt Molloy, At Complete Ease with fiddle-player Brian Rooney, Settle Out of Court with his daughter, the singer and banjo player Maggie Carty and most recently The Wavy Bow Collection with his son, fiddle player James Carty.

He has been joined in this musical exploration by accomplished piper, Mike McGoldrick.
A co-founder of Flook and Lúnasa, and a linchpin of Capercaillie’s line-up since 1998, Manchester-born flute/whistle and uilleann pipes maestro Michael McGoldrick has in recent years performed around the globe in ex-Dire Straits legend Mark Knopfler’s band – including a tour with both Knopfler and Bob Dylan. Despite this lengthy list of stellar collaborations, though – also including Youssou N’Dour, Zakir Hussain, John Cale and the Transatlantic Sessions – his true genius lies in his own trailblazing work as a player and composer, brilliantly showcased on his three solo albums to date. On top of all his other projects he also fronts the exhilarating Michael McGoldrick Band.

Together John and Mike will explore the exciting and innovative combination of the banjo with uilleann pipes, as well as utilising fiddle, tenor guitar and flute. They will be joined  on the night by the much sought after accompanist Matt Griffin on guitar. 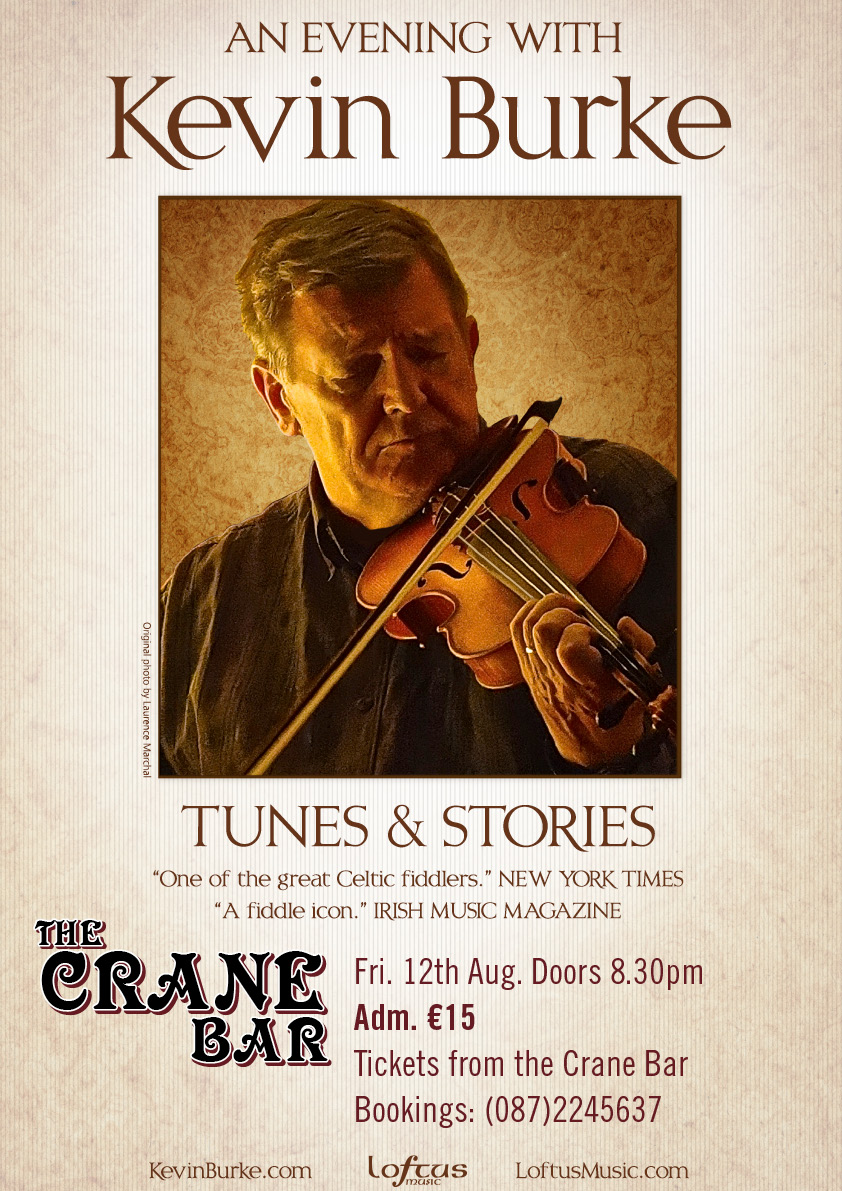 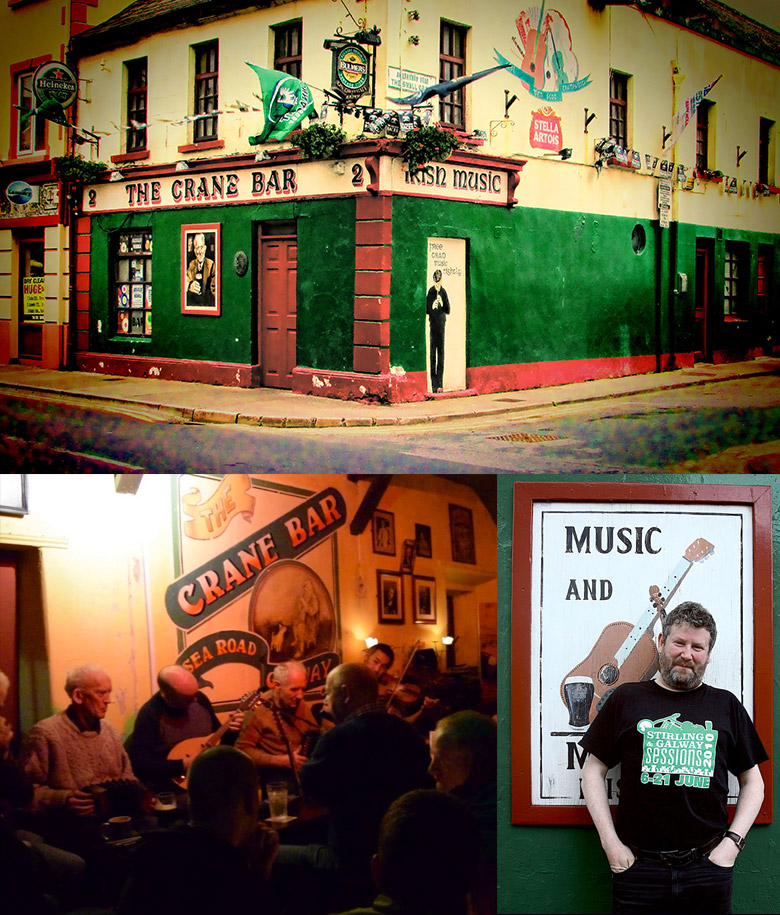 Welcome to the Crane Bar

Upstairs at The Crane Bar is a much loved venue, seating 70 in an intimate and relaxed atmosphere remarked on by both performers and audiences alike.

Concerts here range from singer/songwriters to traditional to roots music. Known far and wide as ‘The Listeners Club’, upstairs at The Crane Bar has been played in by the best known artists in the business as well as up and coming new talents.

Live Traditional Irish Music Every Night at the Crane Bar

Downstairs at The Crane Bar is the ‘local’, one of the few remaining authentic traditional bars with live sessions nightly, and an atmosphere only an Irish ‘local’ can create. Try real tradition at The Crane Bar.

Venue holds between 50 and 70 normally. The room is wide with the stage and mix positions at opposite sides of the main part of the room (short sides).